I’ve just recorded the inaugural Movies Past and Present podcast! In the episode, I discuss the new movies opening this Friday, November 9, 2018 as well as movies recently reviewed on the blog (specifically, The Nutcracker and the Four Realms and Bohemian Rhapsody), and some classic movie info for the week.

I’m hoping to put it on some podcasting services, but in the meantime, here’s this week’s podcast. Thanks for listening! 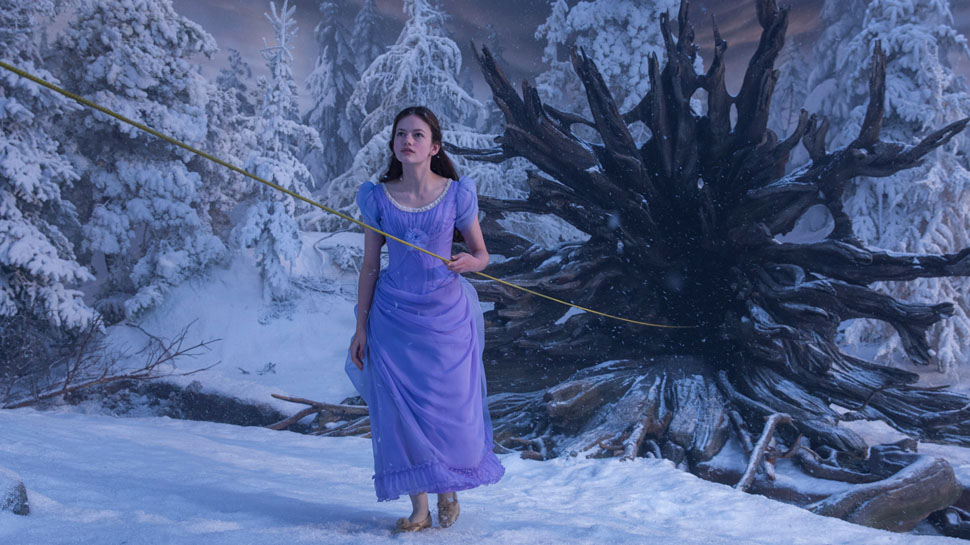 Clara has a big new (emphasis on new) adventure in Disney’s latest CGI extravaganza The Nutcracker and the Four Realms.

“Inspired by” the short story The Nutcracker and the Mouse King written by E.T.A. Hoffmann (1776-1822) and The Nutcracker ballet by ballet master and choreographer Marius Petipa (1818-1910), the film tells an original story written by screenwriter Ashleigh Powell (this is her first produced screenplay). Co-directors Lasse Hallström and Joe Johnston have taken Powell’s story and have given it a beautiful look, even if the actual contents of the story itself are a bit lacking.

The film, as in the ballet that we’re all so familiar with, is focused on a young girl named Clara, played by Mackenzie Foy (this is where the similarities with the traditional Nutcracker end). Clara lives in London with her father and her two siblings. Sadly, Clara’s mother has recently passed away and the family is experiencing their first Christmas without her. On Christmas Eve before the family departs for a big party, the father gives each of the children a sentimental gift from their mother. Clara receives a beautiful golden box, but it requires a key in order for it to be opened—a key which she currently does not possess.

At the party, which is at the expansive estate of Clara’s godfather Drosselmeyer, played by Morgan Freeman (I guess using the Drosselmeyer character is also a similarity to the source material), each of the children in attendance receives a gift, but the gifts are attached to the end of a series of individual strings which have been strung throughout the home. For Clara’s gift, her string leads her outside of her godfather’s home and into a magical, mysterious parallel world. She spots a key in a pine tree, but she is quickly thwarted in retrieving it and thus begins Clara’s journey into the “four realms” as stated in the film’s title.

While in the four realms, Clara joins forces with a soldier named Phillip, played by Jayden Fowora-Knight (who is about as close to a “nutcracker” that we get in the movie). She also meets the Sugar Plum Fairy, played by Keira Knightley, and Mother Ginger, played by Helen Mirren, who are both at war with each other. Clara and Phillip get caught in the middle of the ongoing battle and must navigate it while trying to stay on task to the find the key to unlock the golden box.

The film gets off to a promising and beautiful start, but what follows is a pretty simplistic (and rather boring, at least for this adult) story that never really gains much momentum. The production design is a real knockout, but without a compelling and interesting story, it all becomes an exercise into thinking about what might have been.

On the plus side, the original score by James Newton Howard along with components of The Nutcracker ballet by Pyotr Tchaikovsky are all lovely. The score was conducted by classical music superstar Gustavo Dudamel, who is currently the music director of the Los Angeles Philharmonic. Dudamel also makes a couple of brief cameos in a cool homage to Walt Disney’s original Fantasia. Here’s a tweet from Gustavo Dudamel himself about it.

The film also has two really stunning ballet segments—one during the film and one during the end credits—featuring the renowned ballerina Misty Copeland. Misty,  who is principal ballet dancer for the prestigious American Ballet Theatre, talks about her experience in the featurette below from the Walt Disney Studios YouTube channel.

While I love a good Disney family movie, The Nutcracker and the Four Realms ended up having more style than substance. Still, the little kids who attended the screening I was in enthusiastically clapped at the end of the film, which was a clear reminder that I’m probably not the target audience for this one.

The Nutcracker and the Four Realms is rated PG by the Motion Picture Association of America for “some mild peril.”

As an added bonus, here are some cool posters for the film courtesy of Walt Disney Pictures and Poster Posse.